In the BJP this week there is an very interesting article by Olivier Laurent about photographic archives found in Libya after the fall of the tyrant Gaddafi. The images shown are effectively copies made by the photographers working for Human Rights watch who found them, this leads to a debate about the ownership of the images and the considerations of copyright, some comments arguing that the copying of images and crediting them to the copier feels a bit wrong because the original photographer has rights too. Anyway if you read the article you will be able to read the debate and  the comments and add to the discussion if you wish, this is how the article starts

For the past year, Human Rights Watch has been compiling documents and images found after the fall of Libya’s authoritarian regime in a bid to secure an important passage of the country’s history. Now a selection of these artefacts – named The Gaddafi Archives – is set to go on show at the London Festival of Photography. Olivier Laurent reports……

In the first months of last year, as Colonel Muammar Gaddafi’s stronghold on Libya slowly crumbled, staff from Human Rights Watch came upon hundreds of discarded documents, including images from the regime’s secret police’s archives, as well as the dictator’s own family albums. “When we arrived in Benghazi in February 2011, we found that many of these documents were being burned,” the NGO’s emergencies director Peter Bouckaert told BJP last year. “Almost all of them had been burned already,” he says, so it was a race against time.

“One day we were approached by a Libyan man who had rescued some images from the State Security Services buildings,” photographs that literally smelled of smoke, Bouckaert recalls. “They had been taken out of the building as it was being burned down by the rebels.” Mindful that his organisation could not remove the images from the country, Bouckaert set about documenting them with the help of photographers such as Thomas Dworzak, Michael Christopher Brown and the late Tim Hetherington. Now, eight months after the fall of Tripoli and Gaddafi’s death, a selection of these photographs, documents, artefacts and videos will go on show in the UK at the London Festival of Photography. Curated by Susan Glen, the exhibition aims “to look behind the ‘grip-and-grin’ smiles of the political photo-op propaganda to reveal what was really going on” in Libya, she says…….MORE 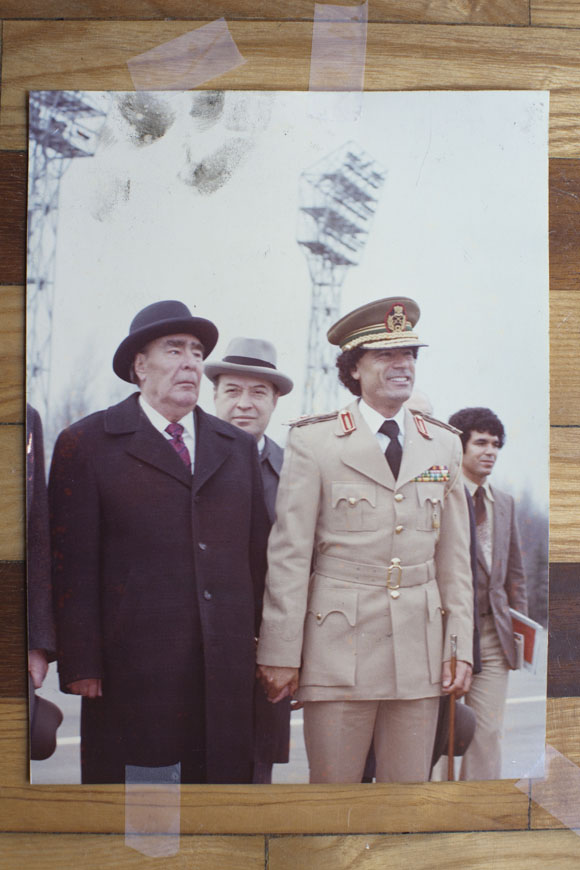