So in theory we are in the middle of summer, well actually to most school kids summer is just about to start but we are in the middle of the year and by now we should be sun drenched but in the UK it is more like October. So cold, so wet and windy as a very windy place…. These fantastic pictures found on The Atlantic website are a reminder of what summer used to mean. There are about 30 odd pictures in total and certainly a good way to cheer you up is to have a look at the site here 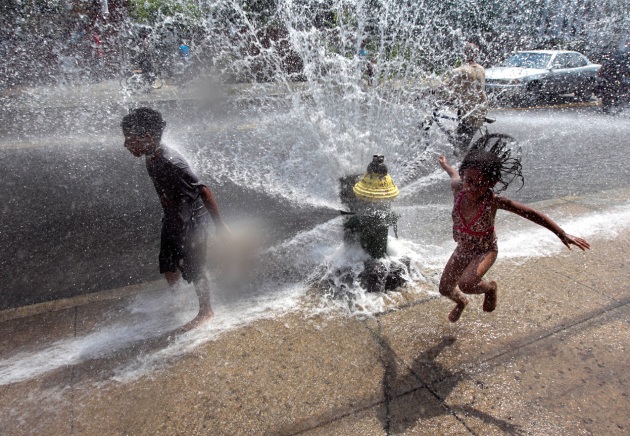 Four-year-old Solaris Arias (right) jumps through water spraying from an open fire hydrant in Providence, Rhode Island, on June 20, 2012. Much of the state remained under a heat advisory Tuesday afternoon because of the steamy air mass that has moved into the region resulting in temperatures in the 90s. (AP Photo/Steven Senne)

A boy slips down a waterslide in the German city of Hameln on May 22, 2012 as temperatures rose to up to 30 degrees Celsius (86F). (Julian Stratenschulte/AFP/Getty Images)

A Bengal Tiger named Akasha dives into the water after a piece of meat at Six Flags Discovery Kingdom on June 20, 2012 in Vallejo, California. On the first day of summer, temperatures in the San Francisco Bay Area ranged from the mid seventies by the coast to mid nineties inland. (Justin Sullivan/Getty Images)

See the rest of these magnificent images here