The Masks We Wear

We wear masks for many reasons: for fun, for protection, or to make a statement. In turbulent public settings, obscuring one’s face can protect an individual from retaliation while evoking fear and uncertainty in others. Donning the mask of a cultural, political, or religious figure can lend that person power and further his or her legacy. Those who wear masks to protect their faces from environmental hazards may also end up sending a message of caution to outside observers. In many cases, though, masks play a more lighthearted role, allowing the wearer to take part in a festival and become someone (or something) else for a time. I’ve gathered here a few recent images of people wearing masks, covering their faces for a wide variety of reason From The Atlantic 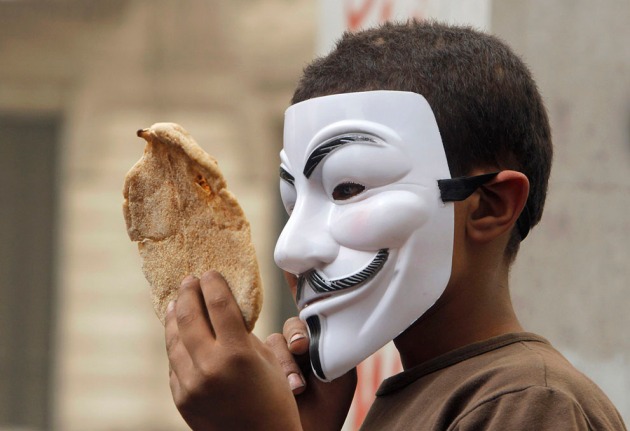 An Egyptian boy wearing a Guy Fawkes Mask holds bread, a symbol of poverty, during an anti-Muslim Brotherhood demonstration in Cairo, Egypt, on March 22, 2013. Thousands of protesters from different areas of Cairo marched on Friday to express their rejection of the Muslim Brotherhood and President Mohammed Morsi’s rule. (AP Photo/Amr Nabil)

Protesters wearing masks perform during anti-austerity and anti-graft protests in Ljubljana, Slovenia, on January 11, 2013. More than 5,000 Slovenians gathered in the center of Ljubljana on Friday to protest against a corruption scandal that threatens to bring down the government. Slovenia’s anti-corruption commission said earlier this week that Prime Minister Janez Jansa had been unable to explain the source of some of his income in recent years. (Reuters/Srdjan Zivulovic)

A man dressed in traditional Perchten mask performs during a Perchten festival in the western Austrian village of Heitwerwang, some 90 km (56 miles) west of Innsbruck, Austria, on November 23, 2012. Each year in November and January people dress-up in Perchten (also known in some regions as Krampus or Tuifl) costumes and parade through the streets to perform a 1,500 year-old pagan ritual to disperse the ghosts of winter. About 15 hours are needed for a woodcarver to sculpt each demon mask which is made from stone pine wood with goat horns attached. (Reuters/Dominic Ebenbichler)

An Afghan woman receives winter supplies at a UNHCR distribution center for needy refugees at the Women’s Garden in Kabul, Afghanistan, on January 2, 2013. (Shah Marai/AFP/Getty Images)

Protestors wear orange prison jumpsuits and black hoods on their heads during protests against holding detainees at the military prison in Guantanamo Bay during a demonstration on Capitol Hill in Washington, D.C., on January 8, 2013. (Saul Loeb/AFP/Getty Images)

A Bahraini boy takes part in a demonstration against the killing of a Shiite protester during clashes with Bahraini police, on February 22, 2013 in the village of Daih, West of the capital Manama. (Mohammed Al-Shaikh/AFP/Getty Images)

Utterly fascinating, go and see them all here

The exhibition has now moved to Poland until 24th of August. Then it should move to Łódź (still in Poland) in January 2015, in Galeria Atlas Sztuki. Still in January the exhibition “HUE” will be presented in Plzen, Czech Republic, in the frame of “Plzen2015, European Capital of Culture”.

Some time ago we posted about a really interesting series of images by Jean-Marc Caracci, here is a link to our earlier post 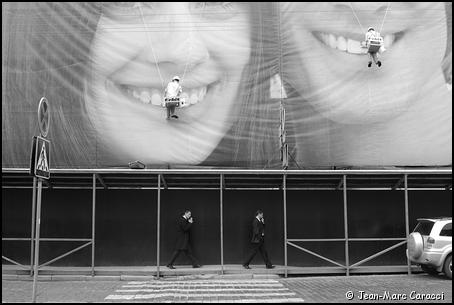 What we liked about this work was the use of a theme to find interesting and absorbing images where ever he found himself and within the context of that theme how all over Europe people are similar. Jean-Marc has been in touch to tell us about his touring exhibition, here are some venues where the exhibition has been and where you might be able to catch the exhibition

Here they are the most important exhibitions scheduled in 2012 :
– in Slovenia… Novo Mesto, in the frame of “Maribor European Capital of Culture 2012” [done]
– in Slovakia… Bratislava, at the “Central European House of Photography” [done]
– in Germany… Duisburg, at the “Ruhr Biennale 2012”.
– in Korea… itinerant exhibition in 5 cities [right now]

There is also a review of the exhibition here  “Silvershotz” has published my “Homo Urbanus Europeanus” portfolio in 2011 [article on the link below]… and the American magazine “Rangefinder” did the same recently : You can find that here

“I am going to publish the album “Homo Urbanus Europeanus”, a book which will include 31 original texts written by 31 European writers… as much writers as European capitals visited in the frame of the project. The British contributor is the writer Stella Duffy.”

There is also a catalogue for the exhibition which is available to buy on line  “Homo Urbanus Europeanus”  (made in Poland in 2009) . You can see it on the link below :
http://homo.urbanus.free.fr/europeanus/book.html

If your photographs ever include the faces of strangers, you might not want to move to Slovenia. Boštjan Burger, a Slovenian photographer that shoots immersive 360° panoramas, has been ordered by the government there to take down roughly 11,000 photo from his website and delete them from his backups because they violate privacy laws....more