…….and six other shots that shook the world

While stories of people drowning at sea as they flee to Europe has been a staple of news reporting this summer, it is this heartbreaking picture that has shocked the country into action. Charities have seen donations soar, petitions have been signed and marches planned since it was published – while, in the face of mounting pressure, David Cameron has finally agreed to taking more Syrian refugees. But this is not the first time a photograph has changed the course of world events.

much of what follows is difficult to look at

The last time a photograph of a dead child was widely published was in July of 2014 when New York Times photographer Tyler Hicks captured the mangled bodies of four Palestinian youths killed in an Israeli airstrike on a beach in Gaza. What is unique about this case, however, is that many news outlets’ decisions to publish the images followed a public outcry on social media. “We got to this point because individuals have had the balls to publish the pictures themselves on social media,” says Pinney. “I think that gave the mainstream media the courage and the conviction to publish this picture.” READ MORE HERE

Make a financial donation to a non-governmental organisation (NGO) that is doing related humanitarian work overseas. These could include:

● Save the Children: distributing essential items such as nappies, hygiene kits and food

● Médecins Sans Frontières: humanitarian agency which has three rescue ships in the Mediterranean

● Aylan Kurdi Fund: named in honour of the drowned child and set up within 24 hours of the horrific pictures circulating around the world. All proceeds are going to charity Hand In Hand For Syria

When the line blurs between sport photography and photojournalism

It is an often debated question, when should a photographer put down their camera and help. We have all seen pictures where it is assumed the photographer has chosen to continue photographing rather than doing the human thing and helping, what should we as photographers do?

Like Hillsborough before it, the Boston Marathon bombing has highlighted how sports stories can quickly turn into breaking news events. When this happens, photographers have to decide whether to help or keep on shooting The Photography Blog at The Guardian asks, read what they think here 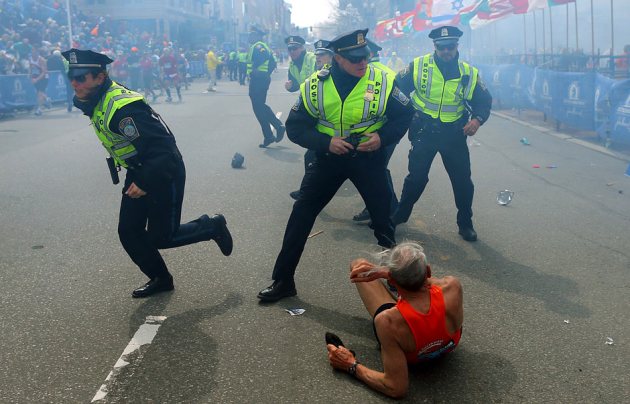 Don’t shoot? … the second explosion at the finish line of the Boston Marathon. Click on image to enlarge. Photograph: John Tlumacki/Boston Globe/AP 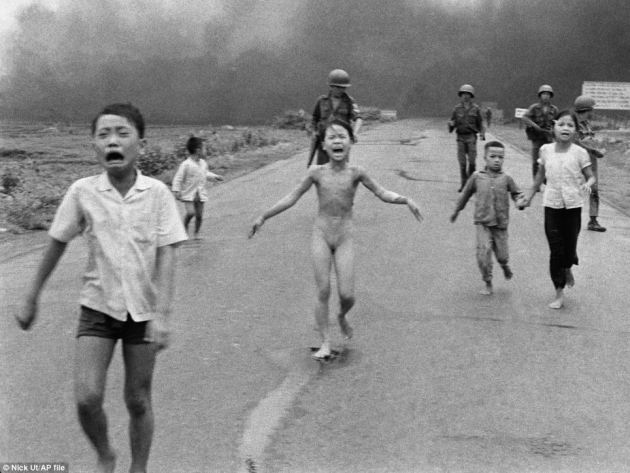 It is one of the most recognisable pictures ever taken and an image that not only defined a war, but defined the career of the man who took it.

Kim Phuc was just nine years old when she ran naked towards Associated Press photographer and Pulitzer prize winner Huynh Cong ‘Nick’ Ut screaming ‘Too hot! Too hot!’ as she headed away from her bombed Vietnamese village.

She will always be remembered for the blobs of sticky napalm that melted through her clothes and left her with layers of skin like jellied lava. Her story has been told many times over the last 40 years since the shot was taken.

But now, to mark four decades since Ut took the picture he has released more moving images that he took during the Vietnam war that chart the horrors of that fateful day in 1972. 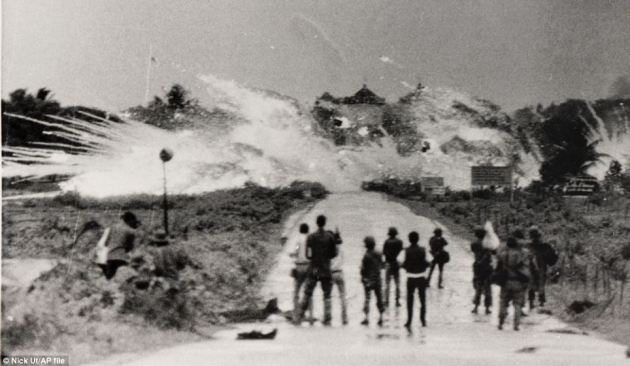 Huynh Cong ‘Nick’ Ut took this picture just moments before capturing his iconic image. It shows bombs with a mixture of napalm and white phosphorus jelly and reveals that he moved closer to the village following the blasts

When compared with the first image it becomes apparent that Ut actually started heading towards the village following the napalm attack. The sign to the right of the picture appears larger while what looks like a speaker to the left of the road is no longer in shot.

As he headed towards the town and took the photo, which Kim Phuc has now found peace with after first wanting to escape the image, he would have been unaware the effect his picture would have on the outside world.

It communicated the horrors of the Vietnam War in a way words could never describe, helping to end one of the most divisive wars in American history.

He drove Phuc to a small hospital. There, he was told the child was too far gone to help. But he flashed his American press badge, demanded that doctors treat the girl and left assured that she would not be forgotten.

‘I cried when I saw her running,’ said Ut, whose older brother was killed on assignment with the AP in the southern Mekong Delta. ‘If I don’t help her – if something happened and she died – I think I’d kill myself after that.’