Leave a comment Posted by oxfordschoolofphotography on April 20, 2012
An unique text and photo essay explores Egypt’s sprawling metropolis as it undergoes one of the most dramatic transformations in its history. Released as part of a new project bringing writers and photographers together on in-depth works, it is available for free in a one-off newspaper format – order details are below.

For fourteen centuries, Egypt’s capital has risen within a pair of stubbornly-persistent natural boundaries – the Moqattam clifftops to the west, and the Saharan desert to the east. Now for the first time Cairo is bursting its banks, sending boutique villas and water-hungry golf courses tumbling into the sand dunes, and reshaping the political and psychological contours of the largest megacity in Africa and the Middle East.Amid an uncertain tide of political change, the controversial ‘satellite cities’ project is dramatically transforming peripheries into new urban centres and consigning old focal points to a life on the margins. Against the backdrop of national revolution, photographer Jason Larkin and writer Jack Shenker collaborated for two years to produce ‘Cairo Divided’, a free hard-copy publication exploring the capital’s rapidly-mutating urban landscape. 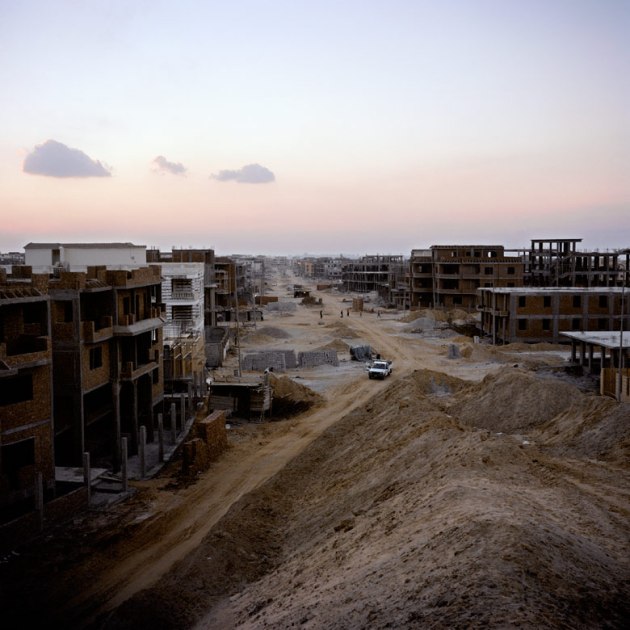 Jason Larkin is a documentary photographer and part of the Panos photo agency in London. Previously based in Cairo, his career has seen him shooting for international periodicals across the Middle East, Africa and Central Asia. His work has been recognized with multiple awards, including the prestigious PDN Arnold Newman Portraiture prize. He is currently based between London and Johannesburg – http://www.jasonlarkin.co.uk.

Jack Shenker is a London-born writer who has reported from across the globe, with work spanning Central Asia, the Indian subcontinent, Gaza and the Mediterranean. Since 2008, he has been Egypt correspondent for the Guardian, and his coverage of the 2011 Egyptian revolution won the Amnesty International Gaby Rado award for excellence in human rights journalism. He is currently based in London and Cairo – http://www.jackshenker.net.

Hard copies of ‘Cairo Divided’ are available at no cost beyond postage and packaging fees. Full details here

Olivier Laurent writing in the BJP has this to say

Divided is a two-year investigation into Cairo’s social and architectural changes, self-published for the first time in its entirety in newspaper form.

Jason Larkin had been working for two years on Divided when he and journalist Jack Shenker decided to publish it in newspaper format. “We never thought about how it was going to end up,” Larkin tells BJP. “Jack was writing long essays, but when they were published in The Guardian or other titles, they were condensed. We thought it would be nice to publish unabridged essays.”

Divided is the story of how the megacity, Cairo, is turning itself inside out. “The project started when I was living very close to the American University of Cairo,” says Larkin. “I remember when the university announced it would be moving to the outskirts of Cairo, a lot of people were surprised. The university sees a lot of students from abroad thinking they would be studying in Cairo, but instead they’d find themselves in the desert.”

Larkin checked the situation out for himself, visiting the construction sites of these huge, new compounds. “There was a lot going on, but no one was speaking about it in Cairo,” he says. “I started investigating, and found these huge developments.” Quickly he realised that once completed, there would be a massive exodus of people from the city to the outskirts.

But these new cities lacked “all the bits they need to function as normal cities,” he explains. “There are huge compounds, ministries, headquarters, office blocks, but no social housing.” The poorest and working classes wouldn’t be able to move to these new towns, in effect dividing Cairo’s population, he says. “I was alarmed by that. I wondered how Cairo was going to change when people start to move there.”

His images, with Shenker’s essays, have now been released in a 32-page newspaper self-published by Larkin in association with Panos Pictures. “There were many reasons for choosing this format – the first one was because of the elections in Egypt. I really liked the idea of coming out with something free that I’d be able to pass on to universities or people learning the politics or the language of this country. I thought it would be a great way to reach people. Egypt is in a very complicated situation and I think a lot of the time people miss out on the real context of what is going on. They are just hearing the daily news. I thought it would be great if people were able to pick up a copy of Divided and have a better understanding of what is actually going on in Cairo and in Egypt.”  ..….MORE