Giles Duley: ‘I lost three limbs in Afghanistan, but had to go back … ‘

Photographer Giles Duley was nearly killed after stepping on a landmine in Afghanistan. Back home, fighting for his life in hospital, he made himself a promise: to return to Kabul to complete his mission of documenting the savage toll that war takes on civilians……..

This is his story. From The Guardian

A few months earlier, I sat in the searing heat of Sudan with Gino Strada, the charismatic chainsmoking surgeon who set up the Italian NGO Emergency, discussing the plight of civilians caught in the Afghan conflict. I was visiting their project in Khartoum, documenting their groundbreaking Salam Cardiac Centre. Over dinner, Gino told me about the work Emergency was doing in Kabul. I had shied away from Afghanistan because I felt so many great photographers were already working there. I’ve always said that if I get somewhere and there’s another photographer there already, I’m in the wrong place. My main interest has been the untold stories of human suffering around the world. However, as Gino explained, with his typical Italian passion, about the plight of civilians caught up in the years of conflict, I realised it was a story I had heard little of. So I resolved at that point to go and document Emergency’s work there, and I made that promise to Gino………. 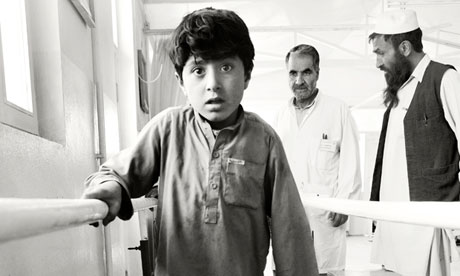 Seven-year-old Ataqullah at the Red Cross limb-fitting centre in Kabul. A year before, while walking to school, he’d stepped on a landmine, losing an arm and leg. Photograph: Giles Duley

While on this embed, one cold morning in February 2011, I stepped on an IED (improvised explosive device), which had me fighting for my life in intensive care for the next two months and left me a triple amputee with only one arm intact……….

Giles Duley with Afghan boy Sediqullah at the Emergency hospital, Kabul. Sediqullah’s hands were damaged when he played with an unexploded fuse. Photograph: Neil Bonner/Minnow films

Read all of this moving and powerful story here If you can’t read there will be a documentary on the tv Walking Wounded: Return to the Frontline will be shown on Channel 4 at 10pm on 21 February