From The Atlantic Magazine

“For nearly three years now, I’ve been posting monthly photo essays on the war in Afghanistan, and a question I hear fairly often is, “Why do you do this?” My intent is to continue to focus attention on what is actually happening on the ground — far from policy debates or speeches. As long as we, as a nation, are sending thousands of men and women into harm’s way and tasking them with acting on our behalf in a foreign country, we need to be aware of what we are asking them to do, what their lives are like, and what the lives of the Afghan people are like. This is true even if the conflict has been going on for more than a decade — and even if we don’t all agree on whether we should be there at all. As of April 12, 120,000 soldiers from 50 nations are committed to Afghanistan, with 90,000 of them from the United States. All are working toward the planned 2014 withdrawal. Gathered here are images of those involved in this conflict over the past month, as part of the ongoing series here on Afghanistan.”…MORE PICTURES 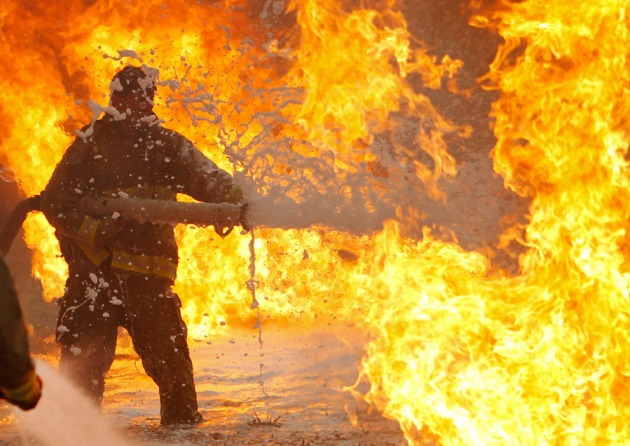 A firefighter sprays water on a burning fuel tanker in Kabul April 23, 2012. The cause of the blaze is unknown and police are investigating. (Reuters/Omar Sobhani)

An Afghan woman looks into the camera in Mazar-i Sharif, capital of Balkh province, on March 30, 2012. Mazar-i Sharif means “Respected Shrine” but the city is known by tourists as the city of the blue mosque which is located in the center of the city known as the Shrine of Hazrat Ali. (Qais Usyan/AFP/Getty Images) 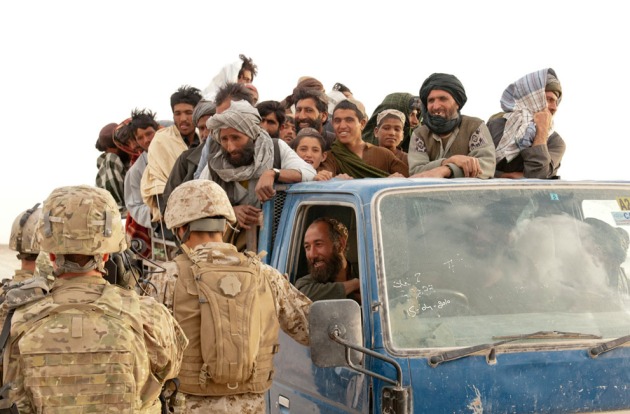 A Marine MRAP sits on a patrol base in Helmand province, run by 5th ANGLICO and Co. A, 31st Georgian Light Infantry Battalion. The Georgians’ mission is to provide security for the local area and a main supply route.(US Army/Sgt. 1st Class Jeffrey Duran)

U.S. soldier Nicholas Dickhut from 5-20 infantry Regiment attached to 82nd Airborne points his rifle at a doorway after coming under fire by the Taliban while on patrol in Zharay district in Kandahar province, southern Afghanistan, on April 26, 2012.(Reuters/Baz Ratner)
More pictures here