Winner of the Atkins Ciwem environmental film of the year 2014: Mohammad Fahim Ahamed Riyad, In search of life, 2014

“A fireman is looking for any signs of life after a fire in Dhaka, Bangladesh. About 400 shanty homes were gutted and four people died in this incident, including a six-year-old child. However, no casualties were ever officially reported and the reason of the fire remained unknown.”

“Cambodian Buddhist monks and local villagers bless one of the remaining large trees in an area destroyed to make way for a banana plantation. Whilst arriving too late to stop the destruction completely, by wrapping an orange cloth around the remaining trees and praying, they are making the trees sacred with the hope to deter future loggers. Following uncontrolled forest destruction in the Central Cardamom protected forest in south-west Cambodia, an eco-warrior monk movement has begun to try and protect areas of forest at risk.” 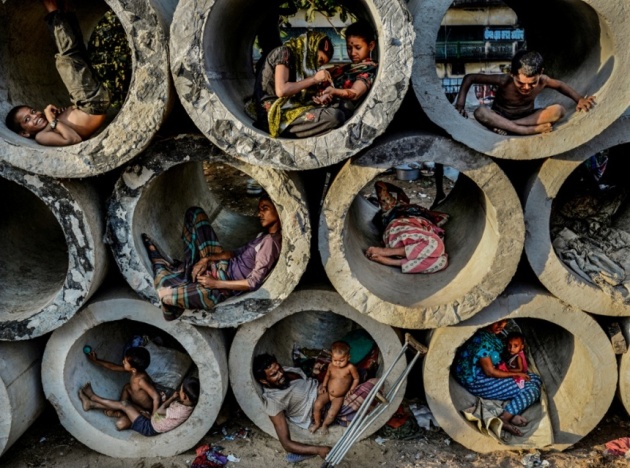 “According to a government report, the total number of beggars, or vagabonds, across Bangladesh is now more than 900,000. The literal meaning of ‘vagabond’ indicates a person who has the capacity to work but is choosing not doing so. It also refers to a person who has no specific place of residence. A vagabond appears to contradict the right to life and freedom of movement, which are guaranteed as fundamental rights by the Bangladeshi constitution. There are allegations of physical, mental and even sexual torture against people in shelter centres.”

“Wieliczka Salt Mine. Engels Leaching Tower, 135m below ground level. A few such towers were built in the mine. Saline water flows through the tower, dissolving lumps of salt placed inside to produce fully saturated brine.”