There is a new exhibition featured on the RPS website by Charlie White, this is what the site says about his new work

In Self Portrait Charlie White continues his investigation of portraiture in a series of figure studies that collapse the classical nude and the contemporary naked self-shot, and he also introduces his first series of still-life photographs: cornucopia-like compositions which operate as corollary to the naked figures. Self Portrait addresses the dominance of the “self” in popular photographic forms, relating these shared vanities to the temporal operations of sexualized self-shots trafficked across platforms such as Craigslist, Backpage, and, 4chan. Naked figures employing the lens as a communication tool and solicitation device are paired with grabbing hands pilfering tabletops of Flemish-inspired abundance, offering a reassessment of the images of self-commodification and survival in our current moment…..READ MORE HERE 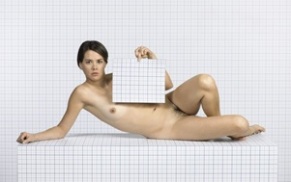 © Charlie White / Naked Girl Reclining, Looking Towards Camera, 2014Within these new works, White continues his use of gridded spaces and planes based on the bottommost layer found “under” the image in digital software—a structure itself derived from the Cartesian system used in Renaissance painting. White’s gridded planes—which have functioned as a sort of measuring tool for his subjects—here become a dimensional space, mapping the x-y coordinates of his subjects and still lifes. This “nowhere space,” without skin or surface, provides a blank plane for analysis and critique.