How Digital Cameras have changed us…..

Hi I am just back from my trip to Laos, pictures to come soon.

The first thing that caught my attention that I just had to bring to you was this fascinating article By Tom de Castella on the BBC website  It tells the history of digital photography and the impact it has had on the way we take pictures, how we interact with our surroundings, how we record our lives and everything we see and finally how phones with cameras have become an absolute game changer.

“Photography firm Kodak has run into hard times, with critics suggesting it has failed to effectively adapt to digital. But four decades ago Kodak was credited with building the first digital camera, an innovation that has changed the world.

The first was a box the size of a small coffee machine with a cassette stuck to the side.

Little did anyone know when it took its first image in 1975 that this Heath Robinson-esque prototype would nearly obliterate the market for camera film and turn us all into potential Robert Doisneaus or Henri Cartier-Bressons, recording everything from the banal to the beautiful on our mobile phones.

Steven Sasson invented that boxy first digital camera for Kodak. But the company has struggled to fully profit from its invention, and with its share price plunging last year there has been growing disquiet about the company’s prospects.” 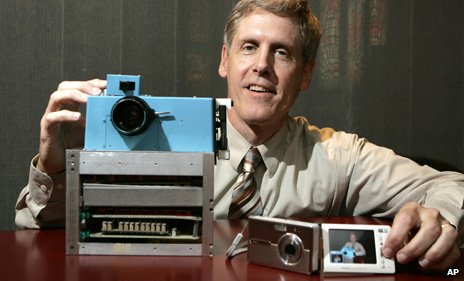 Steve Sasson shows off the digital camera he invented for Kodak 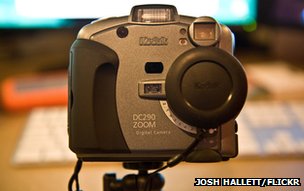 A camera that combined superior sensor resolution and low price. It showed the benefits of linking a camera and a computer. The camera allowed scripts to be created so that instructions would appear on the camera’s screen – such as “now photograph the bathroom” for estate agents. It was a glimpse into the future.

The first digital SLR (single lens reflex) camera that cost less than 1000 euros (£830). At the time amateurs, and many professionals too, could only afford digital compact cameras or what were called “bridge cameras” – models with long range zooms that couldn’t come off the body. This marked the beginning of the fall in the price of proper digital cameras.

The first digital SLR camera to feature video recording. While compact cameras could make movies for some time, the quality was poor and the lenses not very good. In the D90, amateurs could make professional quality films.

One of the biggest problems with digital cameras was that pictures taken in dim lighting were filled with millions of tiny coloured speckled dots – noise. The D3 introduced the ability to shoot in almost completely dark conditions with almost no visible noise.

It doesn’t have the best camera of any mobile phone but it is certainly the most popular. Picture sharing websites, Facebook and Twitter are dominated by pictures taken and shared via the iPhone.

4 Comments Posted by oxfordschoolofphotography on August 16, 2011

There is a download now available that makes it possible to view RAW files as thumbnails in Windows, being a Mac user for more than 30 years I didn’t realise this was a problem but a friend in Denmark alerted me to the difficulty, so here is the resolution of that

Canon move ever onward, the new 600D is ready for release in March, here is the first review by the very well respected DP review site and there is more from the official Canon site here. It has new features such as the articulated monitor now a standard for new cameras and a whopping 18 megapixels, that will eat up your memory.

Ever since Canon introduced its original ‘Digital Rebel‘ back in August 2003 – famously the first ‘affordable’ digital SLR – the company has continually developed and refined its entry-level line with ever-more-frequent releases, adding in more and more features in the process. So true to form, almost precisely a year to the day after the launch of the Canon EOS Rebel T2i / 550D comes the next model, predictably named the Rebel T3i / EOS 600D. As usual the 550D remains in Canon’s range at a lower price point, with the newly-announced EOS 1100D slotting in beneath it to round off the company’s offerings to entry-level SLR users.

The new kid on the block can most succinctly be described as a 550D with an articulated screen, that also incorporates many of the beginner-friendly features we first saw on the more enthusiast-orientated EOS 60D. Perhaps most notable of these is ‘Basic+’, a simple, results-orientated approach to image adjustments in the scene-based’ exposure modes that allows the user to change the look of their images and control background blur without needing to know anything technical about how this all works. The 600D also gains multi-aspect ratio shooting plus the 60D’s ‘Creative Filters’, a range of effects than can be applied to images after shooting, including toy camera, fisheye and fake-miniature looks. Additionally it can now wirelessly control off-camera flashes, including the Speedlite 320EX and 270EX II announced alongside it.