Italian harbor workers stand near a lighthouse at the entrance of the port of the Tuscan island of Giglio, Italy, as in the background lays on its side the grounded cruise ship Costa Concordia, Thursday, Feb. 2, 2012. Bad weather conditions forced the temporary suspension of the recovery operation of the capsized cruise ship Costa Concordia. The ship contains about 500,000 gallons (2,400 tons) of heavy fuel and other pollutants, and fears are growing that those pollutants could spill out, damaging a pristine environment that is home to dolphins, whales and other marine life 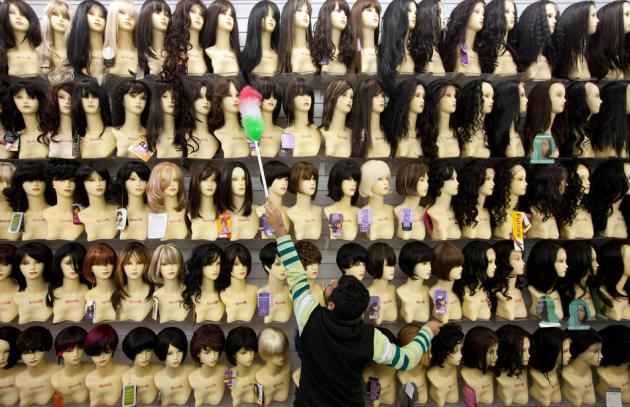 A man dusts shop mannequins displaying wigs in a hair and beauty store in Brixton on February 2, 2012 in London, England. The hair and beauty sector has fared well despite the harsh economic climate which can be attributed to people treating themselves to a little affordable luxury. (Photo by Dan Kitwood/Getty Images)

An Egyptian protestor throws away a tear gas canister fired by security forces during clashes near the Interior Ministry in Cairo, Egypt, Friday, Feb. 3, 2012. A volunteer doctor says police and protesters angry over a deadly soccer riot have clashed for the second day in the Egyptian capital, and that one man died in the latest violence. (AP Photo/Muhammed Muheisen)

A child runs past a wave protection dam covered in ice as the waters of the Black Sea are frozen near the shore in Constanta, Romania, Wednesday, Feb. 1, 2012. The death toll from Eastern Europe’s severe cold spell has risen to 79. Temperatures have dropped as low as minus 32.5 C (minus 26.5 F) in some regions, causing power outages, traffic chaos and the closure of schools and nurseries. The weather is so cold that some areas of the Black Sea have frozen near the Romanian coastline.