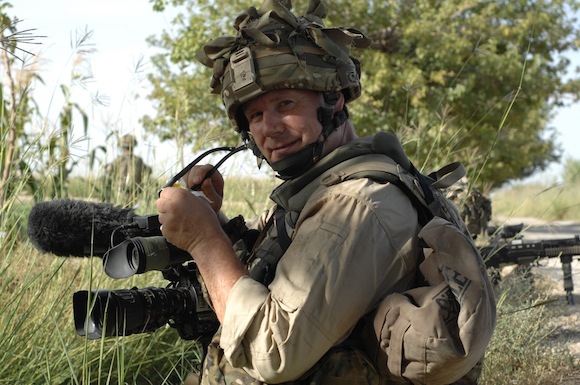 “I think this is all linked to the coverage of the Syrian conflict, which is increasingly being conducted by freelancers,” he tells BJP in a phone interview, hours before news emerged that two journalists, including photographer Edouard Elias, had been abducted on their way to Aleppo in Syria. “The dangers are obviously great. In fact, I think it’s hard to find anything else in the past two decades that has been as dangerous for journalists as Syria has become.”…
For more details about the Frontline Freelance Register, visit frontlinefreelance.org.

From our man (still) in Damascus, John Wreford words and pictures

Our great friend John Wreford is sticking it out in Damascus for the time being, it is his home and has been for 10 years. To many his reluctance to leave would seem to be verging on the insane but John is a man of great fortitude. When I had the chance to travel with him through Syria in 2009 I found that everywhere we went he was greeted like a brother. People would stop him in the streets to say hello and embrace him, hotels we stayed at refused to take payment treating him like family, it didn’t seem to matter where we were there was someone who knew him. I guess that is why he is still there. This piece he has written for Roads and Kingdoms, here are the opening passages…

All photos by John Wreford

Damascenes have long told themselves that their city is where all journeys, all religions and all civilisations begin and end. We who live there now also know that Damascus will be where the final battle for control of Syria will be fought.

Rebel forces are gathered just a few kilometers from the stone walls of the Old City, and inside the walls for almost a year now we have lived with the terrifying sounds of war, the scream of fighter jets, gun battles raging and shells flying overhead. War on our doorstep.

For me the only journeys I ever take these days are around the souks and alleyways of my neighborhood. On these walks I am not only trying to get a sense of the situation, but also a bit of the reassurance that comes from seeing the market busy with shoppers and children heading off to school. I drop in on friends and get updates on the crisis. Often it’s only gossip and rumor, but there are few other reliable sources of information. I check to see what food is in the market and at what price, as there have been days when fresh food and bread have been scarce. Those are the things on my mind as I slam the heavy metal door of my house and head out into the warren of passageways tucked in a corner of the Old City between the ancient gates of Bab Touma and Bab Salam.

Outside my door all is quiet. The street cleaner has collected the rubbish and the cats have retired for a morning nap in the shade of satellite dishes on the wonky roofs. A hose pipe peeks out from behind a door and a woman sprays water over the dusty cobbles. The alley here is no wider than an arm’s length. It doglegs a couple of times, ambles down a few stone steps and underneath an archway, past a small local mosque with a pretty courtyard dotted with potted plants. Despite most of the neighborhood being Muslim, few seem to visit this Mosque. Another couple of steps and another arch and then I see the first sign that life here is not as it used to be: there’s a checkpoint, not military but civilian…..MORE

A selection of prize-winning photographs from the 70th annual Pictures of the Year Internationalphotojournalism contest. Judging of this year’s POYi competition commenced last week with hundreds of photographs receiving recognition across multiple categories.

Pictures of the Year International is a program of the Donald W. Reynolds Journalism Institute at the Missouri School of Journalism. The mission of POYi is to promote and extend the reach of documentary photographers by engaging citizens with documentary photography. POYi is a non-profit, academic program dedicated to journalism education and professional development. From The Denver Post

POYi First Place – SPORTS PICTURE STORY (Casper Hedberg/Freelance for Kontinent) A chapandaz who managed to drop the dead carcass in the “halal” circle can win anything from one hundred to several thousand u.s. dollars. The prize is awarded directly, and then the game starts over again. 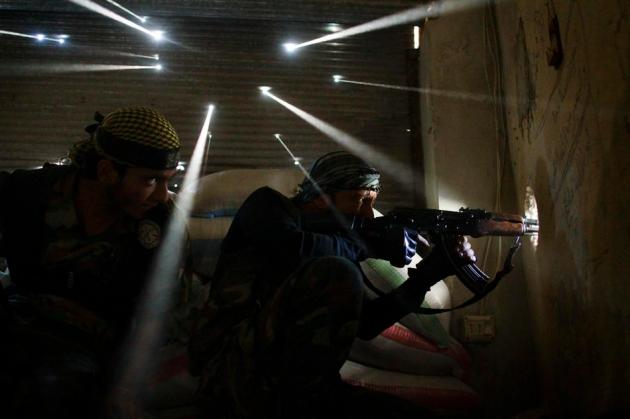 POYi First Place – NEWS PICTURE STORY (Javier Manzano/Agence France-Presse) Two rebel soldiers stand guard in the Karmel Jabl neighborhood of Aleppo as more than a dozen holes made by bullets and shrapnel pepper the tin wall behind them. The dust from more than one hundred days of shelling, bombing and firefights hung thick in the air around them as they took turns guarding their machine-gun nests. Both sides (the Free Syria Army and the regime) rely heavily on snipers – the cat and mouse game of Aleppo’s front lines. The Karmel Jabl and Al-Arqoob neighborhoods are strategically important because of their proximity to the main road that separates several of the main battlegrounds in the city from one of the largest rebel-controlled regions in Aleppo. It is widely believed that if the regime ordered its infantry (most of it is largely composed of Sunni Muslims) to charge the rebels, a large number of the soldiers would defect to the opposition. For this reason, face-to-face combat is rare. Instead, the regime relies mostly on tanks, indirect fire (mortars and artillery), airplanes and snipers. Snipers can hold a line of several streets and can take weeks for the rebels to locate and neutralize.

POYi – WORLD UNDERSTANDING AWARD (David Chancellor/INSTITUTE) Huntress with buck, South Africa. As boundaries are declared with walls and ditches, and cement suffocates the land, the great herds of the past become concentrated in new and strange habitats. Densities rise, the habitats are diminished, and the land itself begins to die. Imbalance is compounded. Man and animal now more than ever find themselves competing for both food and space

From the always excellent photo blog at The Denver Post, 20 images to make you think and to marvel at the talent of the photographers, go here to see the whole series

An Afghan refugee girl stands next to her family’s sheep in a field next to a slum area on the outskirts of Islamabad, Pakistan, Monday, Oct. 1, 2012. (AP Photo/Muhammed Muheisen)

Christian pilgrims take part in a group baptism in the waters of the Jordan River on October 3, 2012 at Yardenit in northern Israel. An estimated 100,000 Christian worshippers make their pilgrimage to the Holy Land each year and one of their most sacred rituals is being immersed in the biblical river where, according to Christian beliefs, Jesus Christ was baptised by John the Baptist. (Photo by Uriel Sinai/Getty Images)

A Syrian man cries outside the Dar El Shifa hospital in Aleppo, Syria after his daughter was injured during a Syrian Air Force strike over a school where hundreds of refugees had taken shelter Thursday, Oct. 4, 2012. The border violence between Turkey and Syria has added a dangerous new dimension to Syria’s civil war, dragging Syria’s neighbors deeper into a conflict that activists say has already killed 30,000 people since an uprising against President Bashar Assad’s regime began in March 2011. (AP Photo/ Manu Brabo)

From the ever excellent pblog on the Denver Post website comes these images from last week. Always surprising, captivating, painful and enlightening, you should bookmark The Denver Post as a must view blog

Air Force One, with President Barack Obama aboard, taxis on the runway under a heavy rain before departing at Andrews Air Force Base, Md., Wednesday, Sept. 5, 2012, en route to Charlotte, N.C. for the Democratic National Convention. ( AP Photo/Jose Luis Magana) # 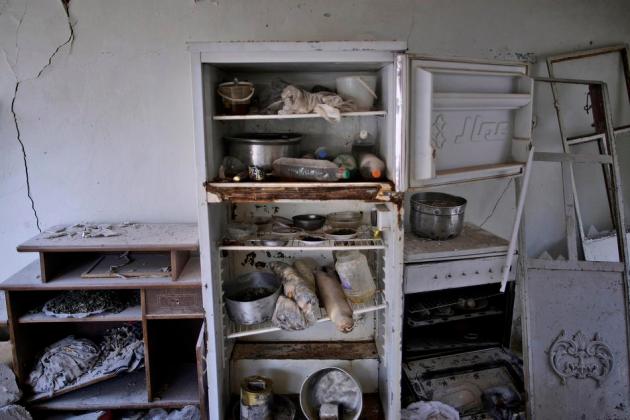 In this Friday, Aug. 31, 2012 photo, food remains in the damaged kitchen of a Syrian house, one of more than a dozen homes destroyed in a Syrian government airstrike on August 15, 2012, that killed more than 40 people, in Azaz, on the outskirts of Aleppo, Syria. Over the past week, survivors and relatives have returned daily to collect from the rubble what can be salvaged as they also relive the day of the airstrike. (AP Photo/Muhammed Muheisen) #

A Hindu devotee performs evening rituals on the banks of the River Ganges in Allahabad, India, Friday, Sept. 7, 2012. Allahabad, at the confluence of the rivers Ganges, Yamuna and the mythical Saraswati, is an important Hindu pilgrimage center. (AP Photo/Rajesh Kumar Singh) 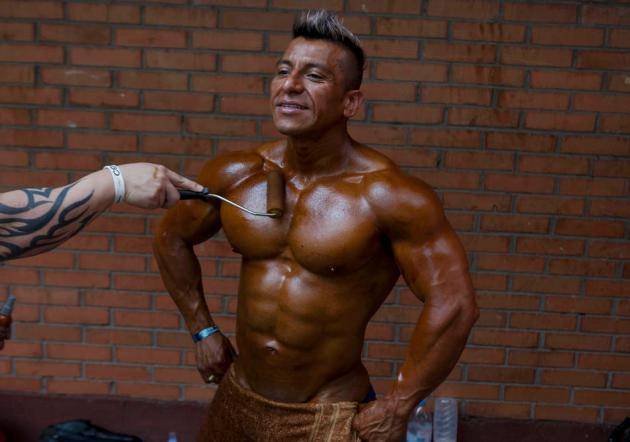 Heriberto Pacheco stands still as someone rolls suntan oil on his skin before competing in the Mr. Mexico and Miss Perfection bodybuilding contest in Mexico City, Sunday, Sept. 2, 2012. The body building competition attracts more than 500 participants from around the country for the three day event. (AP Photo/Eduardo Verdugo) # 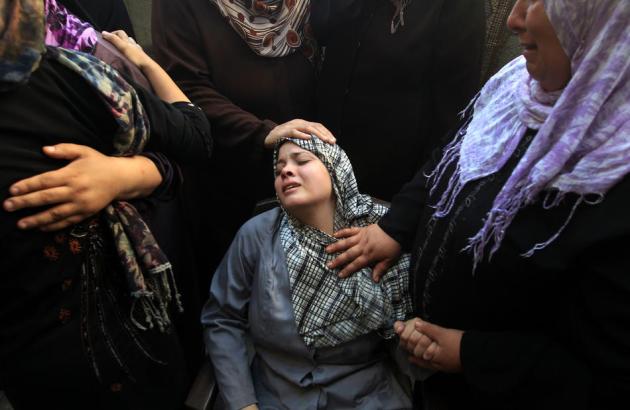 A relative of Ihab and Akram al-Zaanin, two Palestinian brothers who were killed by Israeli fire, is comforted by family members as she mourns during their funeral in Beit Hanun in the northern Gaza Strip on September 6, 2012. Three Palestinians were killed by Israeli fire in the northern Gaza Strip, raising to six the number killed in the past 12 hours, medical sources said. AFP PHOTO /MAHMUD HAMSMAHMUD HAMS #

See all of this gallery here

The highs and lows of life as a documentary photographer

On the road for six months of the year, covering everything from the Iraq war to Agent Orange, Ed Kashi writes home to his wife

“Today in Aleppo, it’s a brilliant, crisp sunny day, after a night of thunder and rain. I’m always coming and going from home. This constant state of flux creates the sense of being suspended between worlds and always feeling isolated on some level, since I can’t ever get grounded or fully connected either at home or on the road. One of the issues at home is how distracted everyone is, whether from your work or the digital gadgets and friends of the kids. And, of course, you all must live your own lives, so you are not in sync with my rhythms and moods.”

Taken 21.09.97“I am once again facing the demons of a tough fixer, the loneliness of the road and less than perfect conditions. But my problems pale when I think about our new baby on the way. It was a shock when I first got the news but now I’m jumping out of my skin with excitement. Who knows what we’ll have? I know you want a girl this time. I just want a healthy baby.

Today we went out at dusk to photograph the cane fields being burned. It was exciting, and I had a near miss. Hot embers were flying everywhere and they had these Zulu workers armed with big sticks to bat the embers down as they tried to fly to an adjacent field not ready for burning. That would be devastating for the farmers. I was on the fire break road that separates the fields, trying to photograph the worker swinging at the embers, when a bunch of them fell on me. They burned holes in my clothes, caught my forearm and left a small mark.

Every night I go to sleep thinking of your swollen belly and all the magic that’s inside. I can’t wait to meet our new child. Only a few months left.

I love you so dearly and deeply”.…..MORE at the Guardian