I have recently returned from Cuba where on every street, or hat, t-shirt, flag or poster there was one image. That image was of Che, taken by Alberto Korda a Cuban photographer. This image is perhaps the most reproduced photographic image in the world, I can’t think of another that is so ubiquitous.

The story of this image, when and why it was taken and it’s passage to iconic status is fascinating.

The moment
The Che image was made on March 5, 1960, at a funeral service for the 136 people who were killed when a French ship carrying arms to Havana was sabotaged and blown-up. Crowds filled the street of Havana, and Korda was there working for the newspaper Revolución. As Castro’s funeral oration droned on Korda approached the speakers’ platform. With Castro were other leaders of the revolution, the French writers Jean-Paul Sartre and Simone de Beauvoir, and, of course, Che. When Korda got close to the platform, he noticed that Che — who had been standing in the back of the stage — had moved forward.

“I remember his staring over the crowd on 23rd street,” Korda says. Staring up, he was struck by Guevara’s expression which he says showed, “absolute implacability,” as well as anger and pain. …..

The “viral” effect
This all changed one day in early 1967 when an Italian publisher, Giangiacomo Feltrinelli, came with a letter from the Cuban government asking Korda to help find him a portrait of Che. Korda pointed to the print hanging on the studio wall, saying that it was the best one he had ever taken of Che…..

The tipping point
But the tipping point for the image was in October 1967, when Che was executed in Bolivia. Demonstrations broke out around the world condemning the murder and Feltrinelli printed up thousands of Che posters and sold them to protesters. The photo was now called Guerrillero Heroico, and it next surfaced in 1968 on New York City subway billboards as a painting by artist Paul Davis advertising the February issue of the Evergreen Review magazine. 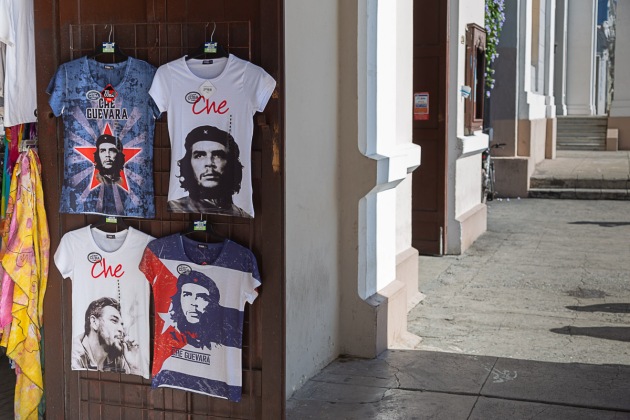