Abandoned places: the worlds we’ve left behind – in pictures

There is a great interest in what is known as Urbex Photography. This is the discovery  and photography of abandoned buildings, usually in an urban setting, we have featured these images often as they are so popular. New photographers are entering this arena and coming with their own take on the meme.

Kieron Connolly’s new book of photographs of more than 100 once-busy and often elegant buildings gives an eerie idea of how the world might look if humankind disappeared. Here are 10 evocative, stylised images of nature reclaiming the manmade world as seen in The Guardian

Rubjerg Knude lighthouse, northern Jutland, Denmark
This lighthouse was built on the top of a cliff in 1900 and ceased operating in 1968. With coastal erosion and continually shifting sands a major problem in the area, it is anticipated that by 2023 the cliff will have been eroded so far that the lighthouse will fall into the sea.
Photograph: Elisabeth Coelfen/Dreamstime

Rotunda, Wola Gasworks, Warsaw
Opened in 1888, destroyed during the second world war, then rebuilt, the Wola gasworks finally closed in the early 1970s when the city switched to using natural gas. Today, part of the gasworks is a museum, but other areas, such as the rotunda, remain dilapidated.
Photograph: Fotorince/Dreamstime.com

City Hall station, New York City
Designed as a showpiece for New York’s new subway system, City Hall station (towards the southern tip of Manhattan) opened in 1904. It’s an elegant structure in Romanesque revival style with skylights, coloured glass and brass chandeliers, but because of its tightly curved platform longer subway carriages were unable to stop there. It was always a quiet station, and passenger services were discontinued in 1945.
Photograph: Michael Freeman/Alamy 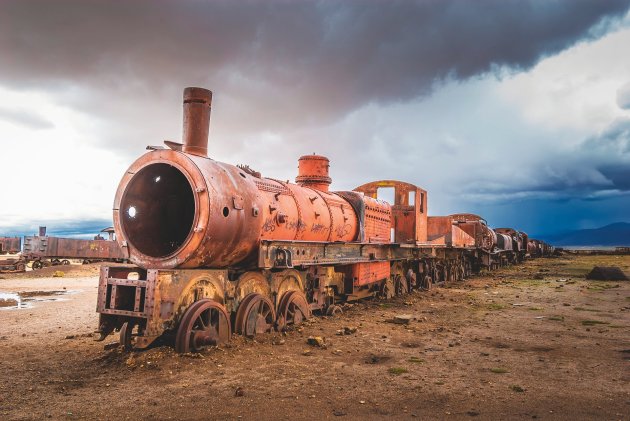 Uyuni Train Cemetery, Bolivia
In the late 19th century, the Andean town of Uyuni served as a distribution hub for trains carrying minerals to Pacific ports. After the mining industry collapsed in the 1940s, the railways fell into ruin, leaving the trains to the harsh winds blowing off the Uyuni flats, the world’s largest salt plain. Today, though, the rusting, graffiti-covered hulks have become one of Uyuni’s attractions.
Photograph: Javarman/Dreamstime