I came across Vee Speers in a Sunday newspaper colour magazine, no point in giving Murdoch a plug, and was immediately interested, When I found Vee’s website the artist’s statement explained why

I don’t like to follow the crowd.
I like to seduce, with images that are at once disturbing and beautiful,
but leaving a space for the viewer to enter my world.
My portraits combine elements which evoke conflicting
emotions that can surprise the viewer, telling a story that is somewhere
between fantasy and reality, the obvious and the unexpected.

Vee Speers was born in Australia and studied at Queensland College of Art. Her work has been widely exhibited and has been seen in publications including The Sunday Times, Harpers & Queen, Arena, Esquire, and Black & White Magazine.

In The Guardian she said this:

This started off as an intimate project. I thought it would be good to freeze a few childhood moments before my daughter became a teenager – that’s her in the picture. My kids used to blow bubbles using their hands in the bath, and I wanted to recreate that. But it’s impossible, of course: soap bubbles only last a few seconds. I found something the French call “balloon paste”: it’s a gluey substance you blow through a straw, and you get these sticky, transparent bubbles that last around three minutes.

The picture became part of a bigger series called The Birthday Party. I was imagining a world run by children, not adults – an anarchic world threaded together by an imaginary party.

This is the only picture in the series that I sketched before I started, and it came out exactly the way I had drawn it. I found the outfit from a dance show she’d done at school, a kind of swingy skirt thing.

Then I wanted a big Marge Simpson hairdo, something totally exaggerated to go with the circles and the balloon. A hairdresser came in and built it. He blew up a regular balloon and pasted some hair of the same colour on to it, like papier-mache. We twisted her hair around the balloon, and got it on her head. That was the hard bit. I had to get her in the right position, have her stick her neck out. It was a bit uncomfortable so I worked really fast: I wanted the photo in the can in five minutes. She’s only nine.

I had no idea this project would be interesting to anyone else. Then I started shooting her friends in similarly peculiar styles, and it all took on a life of its own. It started to look strange and interesting, without me forcing it. Then it became a book, with this as the cover image, and the pictures went around the world. It seemed to strike a chord with people. 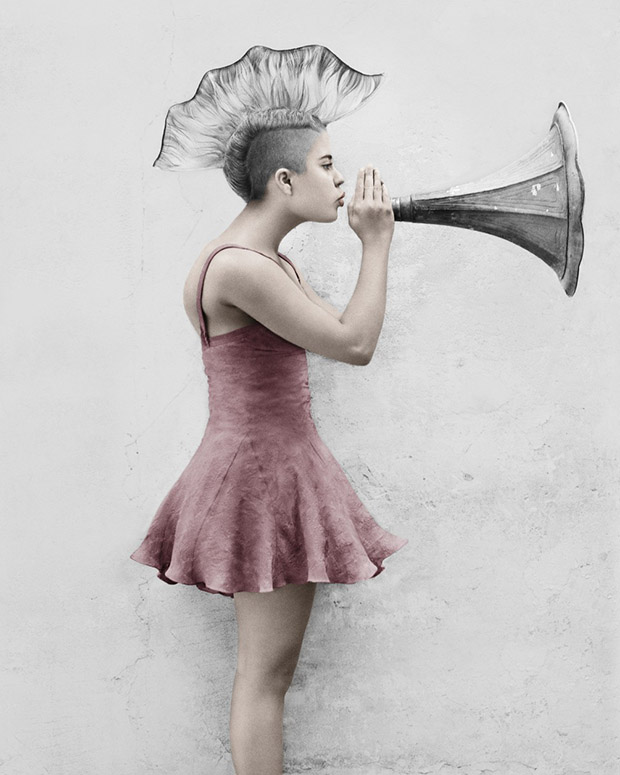 Go to her website to see so much more

High point: “I’m part of an inaugural exhibition at an amazing museum in Stockholm, with Annie Leibovitz.”