Malala Yousafzai acknowledges the crowd at a press conference at the Library of Birmingham after being announced as a recipient of the Nobel Peace Prize, on October 10, 2014 in Birmingham, England. The 17-year-old Pakistani campaigner, who lives in Britain where she received medical treatment following an assassination attempt by the Taliban in 2012, was jointly awarded the Nobel peace prize with Kailash Satyarthi from India. Chair of the Nobel Committee Thorbjorn Jagland made the announcement in Oslo, commending Malala for her heroic struggle as a spokesperson for girls’ rights to education. 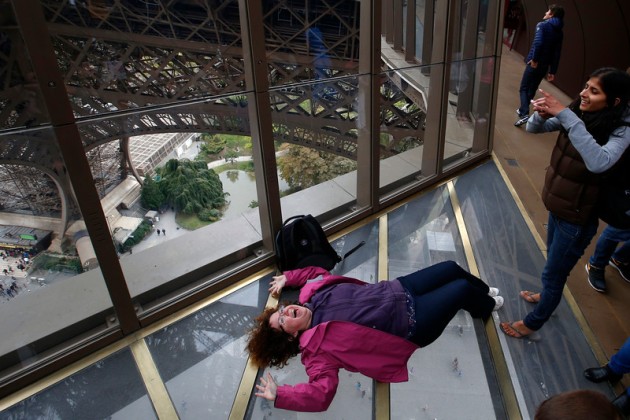 “A Visitors takes a photo on the new glass floor at The Eiffel Tower, during the inauguration of the newly refurbish first floor, in Paris, France, Monday, Oct. 6, 2014. Visitors of the Eiffel Tower can walk on a transparent floor at 188 feet high and look down through solid glass, with safety glass barriers around the edge. (AP Photo/Francois Mori)”

“An Indian child rescued by the workers of the NGO Bachpan Bachao Andolan or Save Childhood Movement which is run by Kailash Satyarthi, poses for a portrait at the Mukti Ashram in New Delhi, India, Friday, Oct. 10, 2014. Taliban attack survivor Malala Yousafzai became the youngest Nobel winner ever as she and Satyarthi of India won the Nobel Peace Prize on Friday for working to protect children from slavery, extremism and child labor at great risk to their own lives. (AP Photo/Bernat Armangue)”

“Members of the Castellers Joves Xiquets de Valls try to complete their human tower during the 25th Human Tower Competition in Tarragona, Spain, on Sunday, Oct. 5, 2014. The tradition of building human towers or castells dates back to the 18th century and takes place during festivals in Catalonia, where colles or teams compete to build the tallest and most complicated towers. The structure of the castells varies depending on their complexity. A castell is considered completely successful when it is loaded and unloaded without falling apart. The highest castell in history was a 10 floor structure with 3 people in each floor. In 2010 castells were declared by UNESCO one of the Masterpieces of the Oral and Intangible Heritage of Humanity. (AP Photo/Emilio Morenatti)”

“An Indian potter prepares clay lanterns used during Diwali celebrations ahead of the forthcoming Hindu festival in Jalandhar on October 8, 2014. Diwali, celebrated this year on October 23, marks the victory of good over evil and commemorates the time when the Hindu god Lord Rama achieved victory over Ravana, and returned to his kingdom of Ayodhya after 14 years exile. AFP PHOTO/SHAMMI MEHRA”

“A protester holds an umbrella during a performance on a main road in the occupied areas outside government headquarters in Hong Kong’s Admiralty in Hong Kong Thursday, Oct. 9, 2014. Talks between the Hong Kong government and student leaders of a democracy protest that has blocked main roads in the Asian financial hub for nearly two weeks are canceled because they’re unlikely to be constructive, a senior government official said Thursday. (AP Photo/Kin Cheung)”

See more from this gallery here