The death of professional photography – another nail in the coffin

Most Of The Pics In Ikea’s Catalog Are Computer Generated

Most of what you see here is not a real photo. | CGSociety 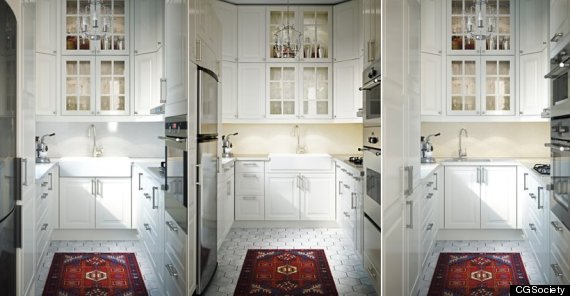 The same kitchen, designed to appeal to three different nationalities

Up to 75 percent of the Ikea products in catalog displays are computer-generated images, according to CGSociety, an Australian graphic-design group. That’s up from25 percent just two years ago.

An Ikea spokeswoman did not respond to a request from The Huffington Post for comment. A spokesman for CGSociety did not return a call from HuffPost to ask whether the group had a business relationship with Ikea.

The transition to computer imagery started in the 2006 catalog, with a single image of a blond-finished wood chair called “Bertil.” As the company’s reach spread around the globe, with different products in various markets, traditional photography became expensive and difficult to manage. Making tweaks to products for certain local markets would require new catalog photos for each market, for example.

Instead of doing that, the company built up a digital library of 25,000 three-dimensional models, which may have helped Ikea speed up the phasing out of its photography.

Ikea last year used these 3-D models in a new “augmented reality” feature for the app version of its catalog. The feature lets customers superimpose 3-D images of Ikea products wherever they point their smartphone cameras — into an empty kitchen or living room, for example.