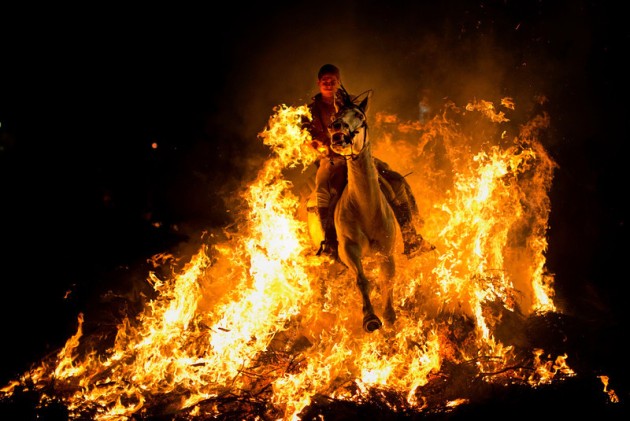 A man rides a horse through a bonfire as part of a ritual in honor of Saint Anthony, the patron saint of animals, in San Bartolome de Pinares, about 100 km west of Madrid, Spain on Thursday, Jan. 16, 2014. On the eve of Saint Anthony’s Day, hundreds ride their horses through the narrow cobblestone streets of the small village of San Bartolome during the “Luminarias,” a tradition that dates back 500 years and is meant to purify the animals with the smoke of the bonfires and protect them for the year to come. (AP Photo/Emilio Morenatti) 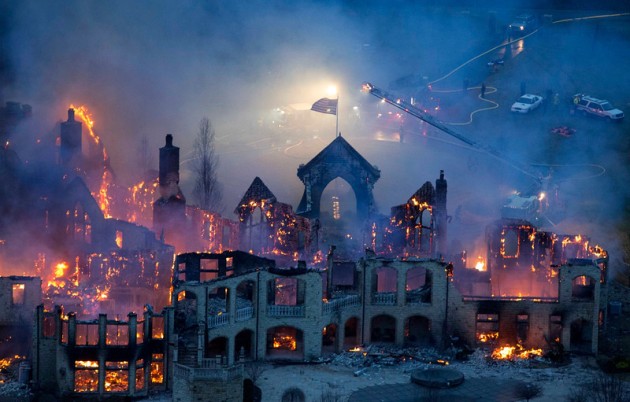 This aerial photo shows firefighters battle a fire at a mansion in Indian Hill, Ohio on Friday, Jan. 10, 2014.   Fire officials are trying to determine what caused the massive fire that destroyed the 22-room mansion in southwest Ohio. There were no injuries reported. Fire officials remained on the scene Saturday. Lt. Jim Gilligan of the Madeira and Indian Hill Joint Fire District says the home was a complete loss. He said it took firefighters about seven hours to put out the fire reported Friday afternoon at the mansion in the Cincinnati suburb of Indian Hill. (AP Photo/The Cincinnati Enquirer, Joseph Fuqua II)

Father Damion, of the Abbot at St. Joseph’s Trappist Abbey, in Spencer, Mass., walks through the monks’ meeting room. St. Joseph’s is a community of 63 Trappistine monks, the largest in the United States. (AP Photo/Stephan Savoia)

Patrons tour an ice castle at the base of the Loon Mountain ski resort in Lincoln, N.H. The ice castle begins to grow in the fall when the weather gets below freezing and thousands of icicles are made and harvested then placed around sprinkler heads and sprayed with water. The castle will continue to grow as long as the temperatures stay below freezing. (AP Photo/Jim Cole)