Photojournalists On War: The Untold Stories From Iraq

I watched the BBC program Imagine with the feature on Don McCullin recently,  a most touching and revealing documentary, which I implore you to watch if you can find it anywhere. In the BJP we find out about a book that merits further investigation. As with the earlier post about L1GHTB1TE the stories behind the pictures are often as important as the images themselves and give us an opportunity to understand more of the photographic process.

Photojournalists On War is the result of five years of interviews with some of the world’s leading photojournalists. However, it’s also the fruit of Michael Kamber’s frustration over the harrowing images that were never shown or published before

The longer that photojournalist Michael Kamber spent covering the war in Iraq, the more frustrated he became. His position on the frontline meant he and his colleagues were closer to the war than anyone, other than the soldiers and Iraqi civilians, yet the photos in the Western media didn’t reflect what he saw happening. “They look like sports pictures to me. It looks like a quarterback limping off the field, being helped by his buddy,” he says. “It’s not what these wars look like.”

With his commitment to accurate reporting shortchanged by what he saw as censorship, Kamber began working on Photojournalists On War: The Untold Stories From Iraq in 2008. The book is a compilation of interviews with 39 photojournalists from around the world, accompanied by some of their most poignant and definitive photos. The aim of the book, which will be released on 15 May in the US and later this year in the UK, is to tell the uncensored story to the general public, an audience that hasn’t been privy to much of what went on there.

The photographs in the book are at once stunning and arrestingly graphic. In one shot, by Eros Hoagland, the severed head of a suicide bomber lies in the middle of the frame, surrounded by the crumpled bodies of doves. Other images show the bodies of American contractors strung from a bridge across the Euphrates, children maimed and bleeding, or grieving and covered in the blood of their family members. Until now, many of these images had never reached the general public.

2 Comments Posted by oxfordschoolofphotography on September 12, 2013

Every year there is a sharp intake of breath as the shortlist for the Taylor Wessing Portrait Prize is announced, rarely can any award be more divisive amongst the practitioners of the discipline than this one. Some hold the choice up to ridicule whilst others marvel at the vapidity of the work, whilst others consider the choices as being visionary. Who knows? Anyway the choice for the short list has been made.

This is what the Artlyst site says  Taylor Wessing Prize

The Taylor Wessing Photographic Portrait Prize 2013 at the National Portrait Gallery will showcase the work of some of the most talented emerging young photographers, alongside that of established professionals, photography students and gifted amateurs. Selected anonymously from an open competition, the diversity of styles reflects the international mix of entrants as well as the range of approaches to the portrait genre, encompassing editorial, advertising and fine art images. The judges have selected 60 portraits for the exhibition from 5,410 submissions entered by 2,435 photographers, an increase of 85 entries on last year. The exhibition will run from 14 November 2013 – 9 February 2014 at the National Portrait Gallery, London.

As well as the four prize winners, the exhibition will feature the John Kobal New Work Award. For the second consecutive year, this will be awarded to a photographer under the age of 30 who work has been selected for the exhibition. The winning photographer will receive a cash prize of £4,000 to include undertaking a commission from the Gallery to photograph a sitter connected with the UK film industry. It will be announced on the 12 November along with the winner.

Anoush Abrar, Dorothee Deiss, Giles Price and Spencer Murphy are up for the £12,000 prize, which rewards the best in contemporary portrait photography. 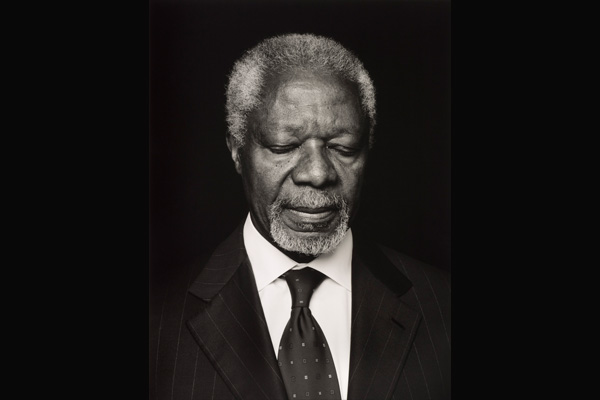 Born in Tehran, Iran (02.06.1976), Anoush Abrar has lived in Switzerland since he was five years old. He studied at the University of Arts in Lausanne and has taught for 14 years. His portrait of Kofi Annan, the Ghanaian diplomat who served as the seventh Secretary-General of the United Nations until 2006, was commissioned by ZEIT Magazine and published in March 2013. Abrar had photographed Mr Annan previously and he says he knew that time was of the essence. ‘In my mind it was clear what I wanted to do’, he says, ‘and this portrait took literally three minutes!’

Dorothee Deiss (08.05.1961) lives and works as photographer and pediatric endocrinologist in Berlin. Born 1961 in Münsingen/ Württ, she studied medicine in Freiburg/Breisgau and since then she has been working as a pediatrician. Since 2003 she has studied photography at the Fotografie am Schiffbauerdamm and at the Ostkreuzschule school for photography and design, Berlin. From 2010-13 she studied in the ‘limited residency MFA in Photography’ programme at Hartford Art School, USA, where she received her MFA in August 2013. She is a founding member of Exp12, gallery for photography, Berlin. Her portrait, from her project VisibleInvisible, is of twin sisters she visited in their house. ‘I took a lot of more conventional portraits of them’, she says, ‘but when I found the bathrobe in a corner, perfectly fitting to the bedspread, that was when I knew I had the picture’.

Spencer Murphy (22.09.1978) grew up in Kent and studied at the Kent Institute of Art and Design before gaining a BA in Photography at Falmouth College of Arts. Taken at Kempton Park Racecourse his portrait of Katie Walsh was taken whilst shooting a series of jump jockeys’ portraits for Channel Four’s The Original Extreme Sport campaign. ‘I set up at the side of the racecourse and pulled in the jockeys as they finished their races, ‘he says, ‘I was keen to include Katie. I wanted to show both her femininity and the toughness of spirit she requires to compete against the best riders in one of the most demanding disciplines in horse racing. I chose to shoot the series on large format film, to give the images a depth and timelessness that I think would have been hard to achieve on a digital camera’. Shortlisted for the Sony World Photography Awards in both 2010 and 2011, Murphy’s work will now have been exhibited as part of the Taylor Wessing Photographic Portrait Prize seven times, and last year his portrait of actor Mark Rylance won him Third Prize.

Hertfordshire-based Giles Price (09.07.1973) has exhibited widely and has been commissioned by several magazines and newspapers. His interest in photography began while on military service. He joined the Royal Marine Commandos at 16 and served in northern Iraq and Kurdistan at the end of the first Gulf War in 1991. After leaving the military due to injuries sustained in Iraq he went on to do a BA in Photographic Studies at University of Derby in 1994-7. His portrait is from a series shot at the 2013 Kumbh Mela Festival in Allahabad India. Taken outside the main hospital in a pop up studio, the portrait shows Mamta who was on a pilgrimage to the Kumbh.