Photos: Cecil and Carl, In Sickness and In Health

This is a perfect example of story telling with pictures, could be taken from the pages of Life Magazine in the 50’s; on The Denver Post Blog 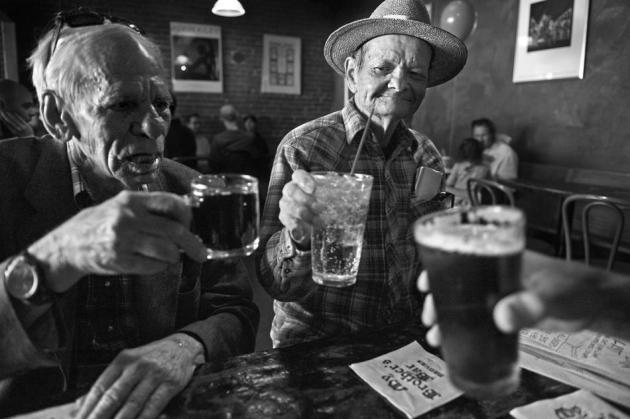 Cecil and Carl toast with a friend to celebrate Carl’s 72nd birthday at My Brother’s Bar in Denver. The couple agrees they met in a bar in 1969, but differ on the location. “There was a dispute we’ve never settled about where we met. I say it was in Mary’s Bar and Carl says it was the Backdoor,” Cecil said. “He came up and asked me a silly question. We got to talking and we spent the night together. We decided to see each other again.” (Photo By Craig F. Walker/The Denver Post)

Over a year ago, Cecil Bethea, 84, watched nursing home attendants hold back his longtime partner, Carl Shepherd, 72, as Cecil turned to go home, where the couple lived together for nearly 39 years.

The two talked about getting married three decades ago, but as gay marriage wasn’t an option, they concluded they were content to continue living together. Cecil said, “signing that lease was our marriage certificate I suppose… Then when we bought the house, we both signed on for that and a house does bring you close together, stretching out into the future.”

Carl, a Blackfoot Native American from Helena, Montana, and Cecil, a southern gentleman from Birmingham, Alabama, met in a Denver bar 44 years ago. “There is a dispute we’ve never settled about where we met. I say it was in Mary’s Bar and Carl says it was the Backdoor,” Cecil recalled. “He came up and asked me a silly question. We got to talking, and we spent the night together. We decided to see each other again.”

Now, Cecil bathes and shaves Carl’s face every other day when he visits him at Juniper Village – The Spearly Center, a nursing home specializing in caring for people with mental illness, brain injuries and neurological disorders. Carl suffers from dementia.

“You see, he’s not Carl anymore,” Cecil said. “As I remember in the old time wedding vows, there was a phrase in there; ‘in sickness and in health,’” Cecil continued. “Well this is certainly sickness. And if I didn’t do it, who would?”

Cecil helps prepare Carl for one of their Denver outings at The Spearly Center in Denver, Colo. Cecil said the two never understood stereotypes, especially those of gay men. “This goes back to the olden days,” Cecil said. “When men paired off they would ask the question; ‘Who’s the husband and who’s the wife?’ Well, Carl crocheted and did car repairs and I did the cooking and the bookkeeping, so we didn’t fit any kind of stereotype. For some reason, we did not like the word ‘lovers’ – that’s a bit pretentious – so we just decided we were partners.” (Photo By Craig F. Walker/The Denver Post)

Carl sits with his partner, Cecil, at My Brother’s Bar in Denver. “Carl is the smartest person I’ve ever met,” Cecil said. “I never figured out why on earth he picked me. Carl could do anything, so he had to have patience with me. Oh I can cook okay, and that’s about it as far as practical skills.” (Photo By Craig F. Walker/The Denver Post) 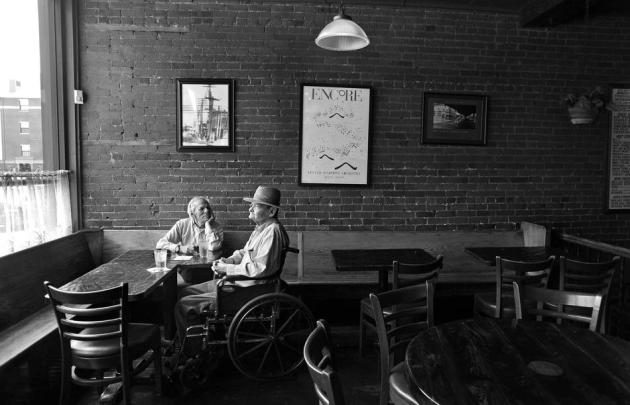 Cecil sits quietly with Carl as they wait for their lunch at My Brother’s Bar. Though marriage was never an option for the couple, Cecil said he believes others should have the right. He compared being gay and gay marriage to being black during the Civil Rights movement. “It’s sort of like the blacks in the south in the 60’s and the sit-ins at the Five &amp; Dime,” Cecil said. “I don’t think they wanted to eat there – they wanted the right to eat there, and I think that’s the way so many gays feel. They aren’t particularly interested in marriage, but they want the right to be married.” (Photo by Craig F. Walker/ The Denver Post)

See the rest of the images from this photo essay here

From Olivier Laurent at The BJP

Lumu Labs has created what it calls the “light meter for the 21st Century” – the Lumu, a device that plugs into an iPhone’s headphone jack to give accurate light readings with the help of a dedicated application.

“We were just a bunch of photographers, totally annoyed by the current selection of light meters on the market,” says Luka Mali of Lumu Labs. “You know the feeling: walking home, rain is pouring and that lame excuse called an umbrella that should supposedly keep you dry. And it’s the same with light meters: they’re huge, unpractical, archaic and cost way too much. We decided to change that – by connecting our beautiful digital light sensor without batteries to your iPhone. And using its brain and connectivity to bring some features never seen in light meters before.”
Read more: http://www.bjp-online.com/british-journal-of-photography/news/2275493/photographers-hope-to-launch-digital-light-meter#ixzz2Wf4Qwrwp
Subscribe to BJP and save money. Click here to save 29% today.