Wildlife photography is one of the most popular items we write about. So many people would love to make pictures of wildlife but don’t have the time, gear or knowledge so being able to see the work of these winners is a joy 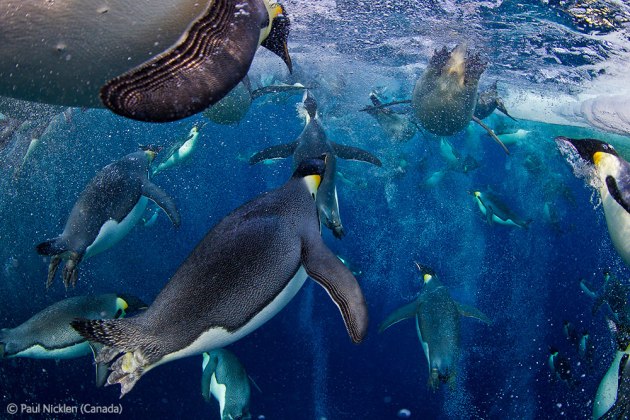 This was the image Paul had been so hoping to get: a sunlit mass of emperor penguins charging upwards, leaving in their wake a crisscross of bubble trails. The location was near the emperor colony at the edge of the frozen area of the Ross Sea, Antarctica. It was into the only likely exit hole that he lowered himself. He then had to wait for the return of the penguins, crops full of icefish for their chicks. Paul locked his legs under the lip of the ice so he could remain motionless, breathing through a snorkel so as not to spook the penguins when they arrived. Then it came: a blast of birds from the depths. They were so fast that, with frozen fingers, framing and focus had to be instinctive. ‘It was a fantastic sight’, says Paul, ‘as hundreds launched themselves out of the water and onto the ice above me’ – a moment that I felt incredibly fortunate to witness and one I’ll never forget.

This world-renowned annual exhibition at the Natural History Museum provides a spotlight on the rarely seen wonders of the natural world.

The 100 winning images that will be on show are selected from 1,000s of international entries and are beautifully displayed in sleek backlit installations.

You can book tickets on line here and directions are here