From Cardinal Photos we have picked up this information regarding the much awaited Nikon D800, as with all rumours it might be true

“Details continue to emerge about the expected Nikon D800. Reportedly a couple shooters have early versions and are confirming that the camera will indeed feature a 36MP full-frame sensor, while being smaller than the D700. At first this seems a little looney, as such a high-resolution camera is unlikely to be able to match the low noise capability the D3/D3s/D700 pack of full-frame sensor cameras have come to be known for. But maybe Nikon is crazy like a fox…

If we look at the resolution of the excellent Nikon D7000, it is 16MP shoe-horned into a DX format sensor. Full-frame, or FX, is 50% larger on each side. That means that an FX sensor as over twice the area of a DX sensor – making a full frame 36MP sensor the same pixel density as is found in the D7000. Couple that with another two years of innovation in electronics, and it is entirely plausible that the D800 will have similar, or perhaps slightly better, noise characteristics than the D7000.

Of course, that isn’t as good as the noise rejection in the D700 or D3, and nowhere near as good as the D3s, so unless Nikon has some serious magic up its sleeve in the sensor department, those hoping for the quality of a D3s sensor in a smaller form factor (me, for one!) are likely to be very disappointed. Similarly, the new Nikon D800 is rumored to be only 4fps, a step down for those used to any of the D3 family or even the Nikon D7000’s 6fps or the Nikon D700’s 5 fps.

The camera is supposed to feature Nikon’s high-end Auto-focus system, but with a 4fps frame rate, it won’t win many fans among action shooters in any case. And then there is the price. The Nikon D800 is rumored to price out at $3,900. That is almost exactly three times the price of a Nikon D7000, and over $1,000 more than a Nikon D700. For studio, catalog and portrait shooters who need to squeeze the last bit of resolution out of their cameras, the nearly $4K price tag may well be worth it, but for most photographers, unless they just want the rush of saying they have a 36MP camera, it’s hard to see a big rush to purchase.

Video recording will be improved on the D800, which makes sense as Nikon is still playing catchup with Canon in that area. Of course all this is still in the rumor stage, and with the lingering effects of the tsunami in Japan and the current flooding in Thailand resulting in delays to the D800, there might well be more changes in store before the time it is actually available.”

This is what the ever useful Nikon Rumors site says

“Supposed pictures of the upcoming Nikon D800 have been leaked to NikonRumors, and show the camera is slightly smaller than its predecessor, the Nikon D700.

The D800 has been anticipated for release from Nikon for several months, with several rumours circulating that the recent floods in Thailand have pushed back the official announcement date.

Specs have been emerging from the upcoming camera for several months now, with the new pictures revealing little that wasn’t already known. A 36 million pixel sensor is thought to be on board, along with 4fps continuous shooting and full HD video recording in 30p.

If reports are to believed, the Nikon D800 has been extremely unlucky in coming to the market, first affected by the Japanese earthquake and recently affected by the Thailand floods.

Nikon has one of its key factories in the affected area of Thailand, and has suffered profit losses as a result of the damage caused.

Some reports have also suggested that there will be two versions of the D800, one with the anti-aliasing filter removed. It seems likely however that even if this were true, they would share the same body construction and shape.” 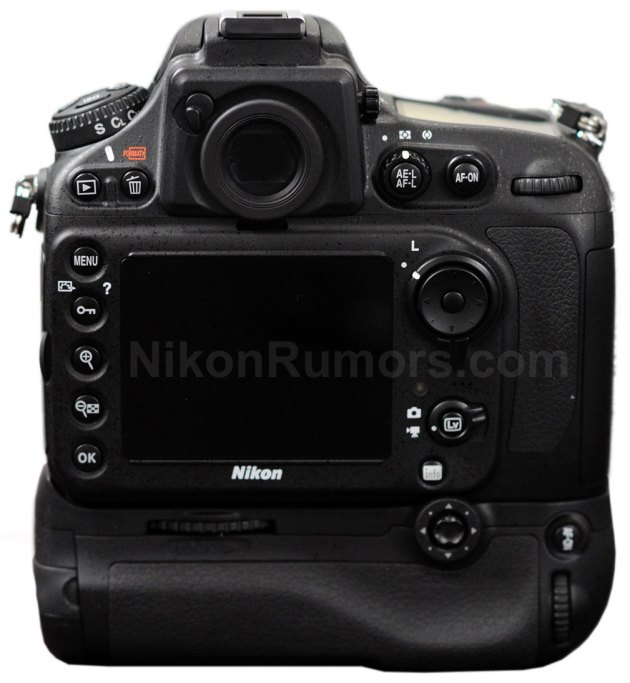