“MOUNT KUMGANG, North Korea – Autumn has always been the most cherished season in Korea, a time to harvest and to hike, to store up food and enjoy the last days of warmth before the peninsula’s notoriously brutal winters. Even in the impoverished North, families find time to gather, around a mountain campfire or in a courtyard where cabbage is laid out to make the year’s supply of pungent kimchi.

This year, in North Korea, as the days become shorter and the evenings chilly, there is a greater sense of urgency in the air.

The whole country is preparing for the big celebrations next April to mark the 100th anniversary of the birth of Kim Il Sung, the ex-guerrilla fighter who founded North Korea in 1948 and remains the nation’s “eternal president” long after his death in 1994. His son, current leader Kim Jong Il, is simultaneously grooming his own young son, Kim Jong Un, to succeed him.”  See the whole series here

North Korean students at Pyongyang University of Science and Technology descend the stairs after a seminar and lecture. (AP Photo/David Guttenfelder)

A North Korean shop employee is reflected in mirrors at a store attached to a factory that manufactures all of the goods sold on the shelves of the shop in Pyongyang, North Korea. (AP Photo/David Guttenfelder) 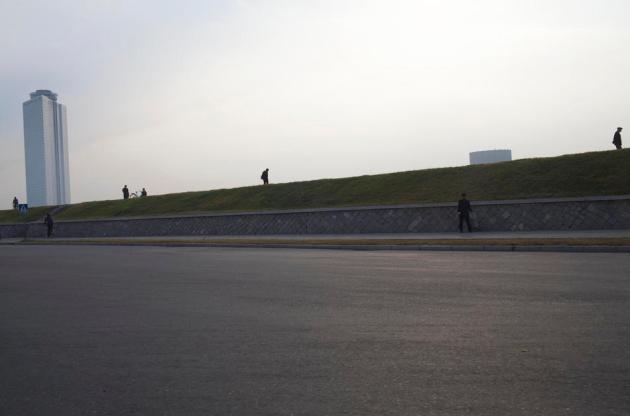 One response to “North Korea in Autumn – David Guttenfelder”