The photographer Barry Feinstein, who died last month shot some of the most enduring rock music images of the 1960s. His portrait of Janis Joplin taken the day before she died graced the cover of her album, Pearl, while his image of George Harrison sitting on a chair surrounded by garden statues appeared on the ex-Beatle’s solo album, All Things Must Pass. His best known work is probably the monochrome image of an unsmiling Bob Dylan on the 1964 album, The Times They Are A-Changin’. Feinstein began his career shooting portraits of film stars for Columbia but branched out taking more candid pictures of the stars outside the studio. After meeting Dylan, he became the singer’s official photographer on his 1966 tour and chronicled Dylan’s switch from acoustic to electric music. “Musicians are actually easier to photograph than movie stars,” he once said. “They’re just not as uptight.”

“The American photographer Barry Feinstein, who has died aged 80, made his most famous series of images when he accompanied Bob Dylan and the Band on their controversial tour of Britain in 1966. On stage, Dylan was aloof to the point of imperious, a dandy in shades and a sharp suit, willing his new electric music on disgruntled audiences who wanted the familiar folk singer they knew and revered.

When Feinstein’s fly-on-the-wall photographs of the tour finally appeared in his book Real Moments, published in 2008, Dylan emerged as an even more complex figure. Often he looks gaunt and fragile, his eyes hidden behind ever-present shades, his body hunched against the cold British winds and the imploring eyes of his faithful. One such image of Dylan waiting for the Aust ferry to take him across the Severn was used as the poster for No Direction Home, Martin Scorsese’s epic 2005 documentary on Dylan.”...more of this obituary by Sean O’Hagen

From the pages of the Guardian.

A fashion photographer who left celebrity behind to capture humanitarian issues, earlier this year Giles Duley lost both his legs and an arm during a landmine explosion in Afghanistan. Here he talks through his best shots.….more 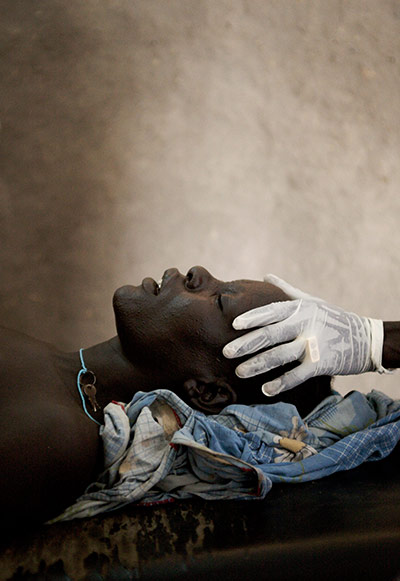 South Sudan 2009
‘A Nuer woman in delivery at the moment of her child’s death. This reflected the dire need for better healthcare in South Sudan; as the nurses were limited, I’d had to help the doctor. I stopped for a moment to take this. It was so private but I felt it should be recorded. In the horror of such an event, there was a strange sort of calm. I’m not a religious man, but that was the closest I’ve felt to something spiritual. Months later, the photo won an award and I felt incredibly uncomfortable about that’
See more here

Fascinating article in the Guardian/Observer by Sean O’Hagan at the weekend regarding the state of photography as considered as art in Britain. O’Hagen is one of the most impressive writers on photography in Britain and the article absolutely to the point.

“The big art institutions here are finally catching up with their American counterparts, with a new photography gallery at the V&A, increased prominence at the Tate and exciting plans elsewhere. We asked four leading curators about the state of the art……..The September issue of the art magazine Frieze ran a glossary of “keywords” in contemporary art and culture. Under “Photography” the compilers wrote: “The first photograph was produced in 1826. In 2009 Tate advertised the following job for the first time: Curator (Photography and International Art). Discuss.” The question invited was: why had it taken so long for photography to be viewed as a serious art form in Britain? The Museum of Modern Art in New York, for instance, appointed its first curator of photography, Beaumont Newhall, in 1940.”.………….more

9 Tips for a Perfect Portrait Background

From one of our favourite sites Photo-Tuts comes this tutorial on better portrait photography by managing the backgrounds. We teach this is our ever popular Portrait Photography course but you may not live near Oxford

“Flatter your portrait subject with the perfect background, even if you don’t have professional backdrops or lighting. A little exposure and composition know-how can get you a long way toward a beautiful portrait background.

This tutorial is a grab-bag of helpful ideas for photographers of any level. I’ve written them with the idea that once you master them all, you will have a bag of tricks at your disposal. Pull out one or combine several, and you’ll be able to quickly adapt to all kinds of lighting and subject situations and walk away with a wonderful portrait. Many of the techniques, however, work best with just one or two subjects. As a group becomes larger, you’ll find your available options becoming fewer. Such is the life of a portrait photographer”.…more